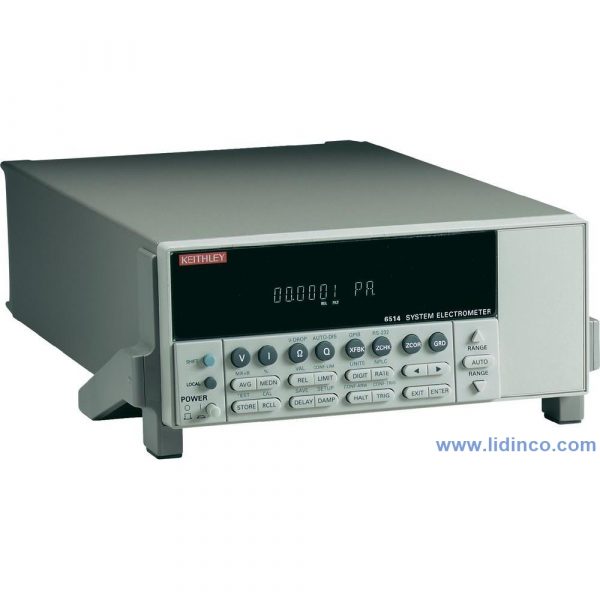 The 5½-digit Model 6514 is designed for applications that demand fast, yet precise measurements of low currents, voltages from high resistance sources, charges, or high resistances.

The Model 6514’s exceptional measurement performance comes at an affordable price. While its cost is comparable with that of many high end DMMs, the Model 6514 offers far greater current sensitivity and significantly lower voltage burden (as low as 20µV) than other instruments can provide.

R&D on a Budget

The Model 6514 offers the flexibility and sensitivity needed for a wide array of experiments, providing better data far faster than older electrometer designs. Applications include measuring currents from light detectors and other sensors, beam experiments, and measuring resistances using a current source. In addition to use by researchers in areas such as physics, optics, and materials science, the Model 6514’s affordable price makes it an attractive alternative to high end DMMs for low current measurement applications, such as testing resistance and leakage current in switches, relays, and other components. For more information on how the Model 6514 does this, refer to the section titled “Low Voltage Burden.”

The Model 6514 builds on the features and capabilities of the Keithley electrometers that preceded it. For example, like those instruments, a built-in constant current source simplifies measuring resistance.

Once, electrometers were simply considered too slow to keep up with the high throughput that production test applications demand. The Model 6514 is designed for fast, sensitive measurements, providing speeds up to 1200 readings per second with fast integration or 17 measurements per second with 60Hz line-cycle integration. It offers 10fA resolution on 2nA signals, settling to within 10% of the final value in just 15ms. A normal-mode rejection ratio (NMRR) of 60dB allows making accurate low current measurements, even in the presence of line frequency induced currents, which is a common concern in production floor environments. The instrument’s sensitivity makes it easy to determine the leakage resistance on capacitances up to 10nF or even on higher capacitances when a series resistor is used.

While the Model 6514 can be easily operated manually using the front panel controls, it can also be externally controlled for automated test applications. Built-in IEEE-488 and RS-232 interfaces make it possible to    program all instrument functions over the bus through a computer controller. The instrument’s interfaces also simplify integrating external hardware, such as sources, switching systems, or other instruments, into the test system. A digital I/O interface can be used to link the Model 6514 to many popular component handlers for tight systems integration in binning, sorting, and similar applications.

These features make the Model 6514 a powerful, low cost tool for systems designed to test optical devices and leakage resistance on low-value capacitors, switches, and other devices, particularly when the test system already includes a voltage source or when the source current/measure voltage technique is used to determine  resistance. Figure 3. Errors Due to Burden Voltage when Measuring with a DMM

The Model 6514’s feedback ammeter design minimizes voltage offsets in the input circuitry, which can affect current measurement accuracy. The instrument also allows active cancellation of its input voltage and current offsets, either manually via the front panel controls or over the bus with IEEE-488 commands.

When measuring dark currents (Figure 1) from a device such as a photodiode, the ammeter reads the sum of two different currents. The first current is the dark current (I D ) generated by the detector with no light falling upon the device (in other words, the signal of interest); the second one is the leakage current (I L ) generated by the voltage burden (V BURDEN ) appearing at the terminals of the ammeter. In a feedback ammeter, the primary “voltage burden” is the amplifier offset voltage. This leakage current represents an error current. Without the use of cancellation techniques, I L  = V BURDEN /R L . Figure 2 illustrates how the Model 6514’s CAL V OFFSET  is adjusted to cancel V BURDEN  to within the voltage noise level of a few microvolts, so the measured current is only the true dark current (I D ) of the photodiode. In a similar manner, offset currents can also be cancelled. Earlier electrometers used an internal numerical correction technique in which the voltage burden was still present, so the measured dark current included the error term I L  = V BURDEN /R L .

Electrometers provide current measurement with lower  terminal voltage than is possible when making DMM meas urements. As shown in Figure 3, DMMs measure current using a shunt resistance that develops a voltage (typically 200mV full-range) in the input circuit. This creates a terminal voltage (V BURDEN ) of about 200mV, thereby lowering the measured current. Electrometers reduce this terminal  voltage by using the feedback ammeter configuration  illustrated in Figure 1. The Model 6514 lowers this terminal voltage still further—to the level of the voltage noise—by canceling out the small offset voltage that remains, as shown in Figure 2. Any error signals that remain are  negligible in comparison to those that can occur when measuring current with a DMM.

Typically, offset currents in DMMs are tens or hundreds of picoamps, which severely limits their low current measuring capabilities compared to the Model 6514 with 3fA input bias current.