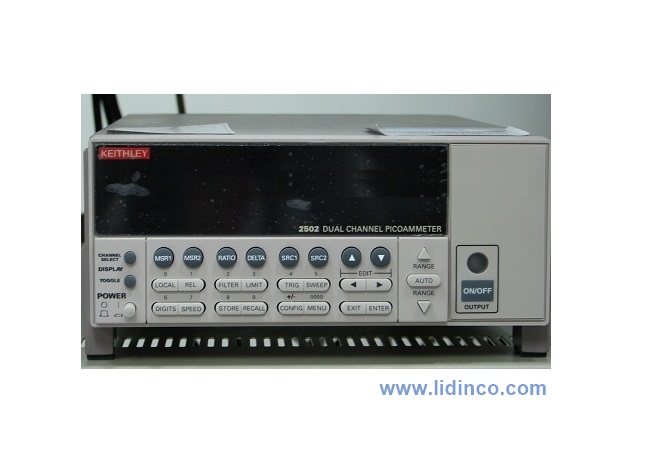 The Model 2502 Dual-Channel Picoammeter provides two independent picoammeter-voltage source channels for a wide range of low level measurement applications including laser diode testing. The Model 2502 is also designed to increase the throughput of Keithley’s LIV (light-current-voltage) test system for production testing of laser diode modules (LDMs). Developed in close cooperation with leading manufacturers of LDMs for fiberoptic telecommunication networks, this dual-channel instrument has features that make it easy to synchronize with other system elements for tight control over optical power measurements. The Model 2502 features a high speed analog output that allows using the LIV test system at the fiber alignment stage of the LDM manufacturing process. Through the use of buffer memory and a Trigger Link interface that’s unique to Keithley instruments, the Model 2502 can offer the fastest throughput available today for LIV testing of laser diode modules. These instruments are ruggedly engineered to meet the reliability and repeatability demands of continuous operation in round-the-clock production environments.

In a laser diode module DC/CW test stand, the Model 2502 provides the voltage bias to both the back facet monitor diode and a Model 2500INT Integrating Sphere or to a fiber-coupled photodetector. At the same time it applies the voltage biases, it measures the current outputs of the two photodetectors and converts these outputs to measurements of optical power. The conversion is performed with the user-programmed calibration coefficient for the wavelength of the laser diode module. Fast, accurate measurements of optical power are critical for analyzing the coupling efficiency and optical power characteristics of the laser diode being tested. When testing modules with multiple detectors, the Model 2502 packs more testing capabilities into less test rack space.

The Model 2502’s 2nA current measurement range is ideal for measuring dark currents and other low currents with 1fA resolution. Once the level of dark current has been determined, the instrument’s REL function automatically subtracts the dark current as an offset so the measured values are more accurate for optical power measurements.

The Model 2502 is capable of taking 900 readings/second per channel at 4½-digit  resolution. This speed is comparable with the measurement speed of the Model 2400 SourceMeter  instrument, which is often used in conjunction with the Model 2502 to perform opto electronic device test and characterization. Both instruments support Trigger Link (a proprietary “hardware handshaking”  triggering system that’s unique to Keithley products) and buffer memory. When programmed to execute a sweep, Trigger Link ensures measurement integrity by keeping the source and measurement functions working in lock step while the buffer memories record the measurements. Together, source memory, buffer memory, and Trigger Link eliminate GPIB traffic during a test sweep, improving test throughput  dramatically.

The Model 2502 is designed for tight integration with other
Keithley instruments that are often used in LIV test systems for
laser diode  modules. These other instruments include the Model
2400 SourceMeter ®  and Model 2510 TEC SourceMeter instruments.

The Model 2502 can provide ratio or delta measurements between the two completely isolated channels, such as the ratio of the back facet monitor detector to the fiber-coupled photodetector at varying levels of input current. These functions can be accessed via the front panel or the GPIB interface. For test setups with multiple detectors, this capability allows for targeted control capabilities for the laser diode module.

As with most Keithley instruments, the Model 2502’s current and voltage limits can be programmed to ensure device protection during critical points such as start of test, etc. These instruments also provide Average and Median filters, which can be applied to the data stored in the buffer memory.

Unlike optical power meters with integrated detectors, the Model 2502 allows the user to choose from a wide range of measurement capabilities simply by selecting an appropriate photodetector and programming the calibration  coefficient of this detector at the wavelength of choice.

To speed and simplify system integration and control, the Model 2502 includes the Trigger Link feature and digital I/O lines, as well as standard IEEE-488 and RS-232 interfaces. The Trigger Link feature combines six independent software selectable trigger lines on a single connector for simple, direct control over all instruments in a system. This feature is  especially useful for reducing total test time if the test involves a sweep. The Model 2502 can sweep through a series of measurements based on triggers received from other instruments. The digital I/O lines simplify external handler control and binning operations.

The Model 2502 includes an analog output jack on the rear panel for each channel.